The History of Craft Cocktails in Pittsburgh Pt.1

There is a saying: "everything happens in Pittsburgh 5 years after New York City". That has certainly been true for the current Craft Cocktail (or Pre-Prohibition Cocktail) bar explosion. The argument could be made that it's even taken 10 years to fully bloom in Pittsburgh? In 2012 the new trend that has developed in the restaurant and bar world is finally taking root here. Like so many other forms of art, it has evolved with a distinct, Pittsburgh touch. The bartenders who have taken up the cause have been forced to create a hometown cocktail culture primarily by visiting other cities or studying books, trade magazines and online resources to emulate the cocktail craze sweeping the country. Like our music scene which has very little influence from touring acts (Pittsburgh is not considered a viable stop for up-and-coming independent performers - though I should mention this changing as well) we've had to improvise, and that improvisation has given Pittsburgh a very unique "sound".
I imagine in the 1880's, before radio, television or the internet, that trends reached Pittsburgh 20-30 years after New York? Which might explain the lack of cocktail culture in Pittsburgh when the rest of the world was seeing an explosion of this new style of imbibing. By the time the news hit Pittsburgh, the city was probably gearing up for Prohibition? There are no articles about Pittsburgh bartenders in local archives. The only evidence I could find that there were any disciples of Professor Jerry Thomas to be found on the Three Rivers was from David Wondrich's book Imbibe where a recipe for a Bronx Cocktail was credited "A la Billy Malloy, Pittsburgh, PA". But even then, it was well know that Billy Malloy was not the creator of the drink, only credited with the 'first on record' in William T. Boothby's World Drinks and How to Mix Them.
Pittsburgh is no stranger to a cocktail scene, but cocktails have always been overshadowed by Pittsburgher's love for beer. The strong Scot/Irish, Welsh, German and Eastern European immigration to the steel city fortified beers stranglehold on the imbibing population. East Carson Street has often been noted in the Guinness Book of World Records as owning the highest density of bars per square footage. Originally the number of bars were built to satisfy the steel workers who would end a shift and cross the street to the closest watering hole for a beer (or two... or three) before heading up the the steep slope steps towards home (and to often stop at another of the numerous saloons that littered the hillside, conveniently located next to the slope steps). Presently, the bar proliferation serves to quench the thirst of thousands of students who attend one of the many educational institutions that reside in the 'Burgh (Duquesne University, University of Pittsburgh, Carnegie Mellon University, Chatham College, etc...). 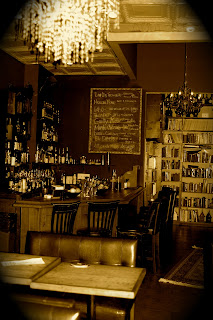 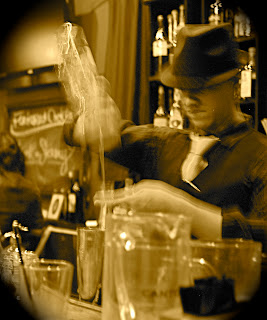 In New York City Milk & Honey opened in 2000, Employees Only opened in 2004, Pegu Club opened in 2005, both Death + Company and PDT opened in 2007. Violet Hour in Chicago opened in 2005. All across the world, from London to San Francisco, craft cocktail bars were popping up everywhere.
Meanwhile, in Pittsburgh, a good cocktail was relegated to the pre-dinner crowd who had the good sense to show up half and hour early for their reservation to get a cocktail at notable restaurant bars like Eleven, Tamari, Yo Rita, Soba, Casbah or Dish. At each of these bars, and select others, bartenders were expanding on their craft, playing with new flavors and learning techniques from aforementioned books and now the more accessible internet. But it was all very elementary. We mostly muddled our way through recipes without the proper knowledge or training or prestigious genealogy that other city bartenders boasted.
Until we had our first Pittsburgh celebrity bartender who could teach Pittsburgh bartenders craft cocktailing in practice, and a food critic who had partaken of the wonderful potables which other cities offered and was willing to encourage the newly changing cocktail scene in Pittsburgh.
Posted by Sean Dwyer Enright at 9:08 PM